Okay - I promise I will catch up eventually. I sprained my ankle on a run last weekend, so things are a bit slower now, and I might get some time to write up some blog posts. Thankfully, I don't have to write about that run, since, Emily already did!
Posted by Paul Norwood at 5:55 PM No comments:

The writing is on the wall: Guatemalan politics

Some people may have forgotten that what recently happened to the president of Honduras almost happened to Alvaro Colom, the president of Guatemala, just a little while before. His party is the UNE, and he is generally thought of as a moderate leftist. It is important to remember that the rule of law is not very stable in Guatemala. There are "parallel powers"that constantly challenge the authority of an apparently democratic state. These parallel powers are mostly formerly semi-official armed groups, narco-trafficking organizations, and business-owning families. 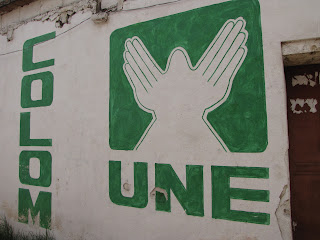 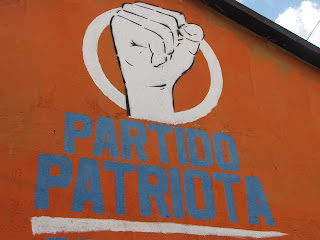 The FRG, or Frente Revolucionario Guatemalteco, is led by Rios Montt - Reagan's good buddy and an all-out genocidal maniac when he was dictator in the early eighties. His party distinguished himself by spitting on and insulting the Nobel Prize-winner Rigoberta Menchu inside the constitutional court! Wait! Isn't that bad enough? He actually didn't like it when the constitutional court ruled against his application for the presidency on the grounds that in Guatemala one can only be president for one term. His justification: he was never elected president; he was merely a dictator! So in 2003 he got a few battalions' worth of thugs together (not really thugs, in fact they were former paramilitaries), surrounded the constitutional court, and they changed their mind. 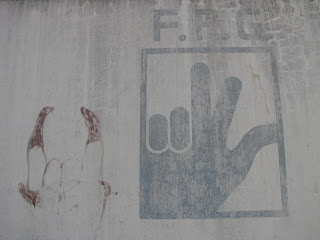 Is this depressing? Try watching your kids starve to death and join gangs. Try having your relatives abducted or executed, while the police cannot or will not do anything about it because they are too weak or are implicated in the first place. Guatemala is a relatively rich country, but it is on the verge of being a failed state. A Honduras-style coup is easily imagined there, and would instantly throw everything back a decade or so, to the times of the peace accords. The only people that wouldn't hurt would be the rich, and yet again the poor would pay. The revolutionary groups (the real revolutionary groups, not the FRG) don't have a clear leader. Even Rigoberta Menchu doesn't stand a very good chance at the polls. 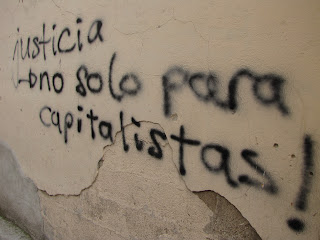 Before any significant positive change is possible in Guatemala, the state needs to raise taxes (they are ridiculously low right now), and bring some of the GDP to the majority of Guatemalans whose only options are misery, emigration, and crime.
Posted by Paul Norwood at 4:40 PM No comments:

Worshipers and objects of worship

I generally find religion to be a little bit of a sad topic, so I generally stay out of it. How ridiculous would it be if we said that only our own language was true, and all other languages were wrong? That's often what I see with religion, where most people seem to be unable to break through a thin doctrinal veneer to get to the underlying philosophical issues. However, in Guatemala religion is just too important to be overlooked. It is all too easy to forget that the few news we get from Central America are restricted to the tiny ruling class and natural disasters. It must be remembered that Central America is mostly about peasants and gods, not politicians and hurricanes.

First of all, the dead are a little bit more alive. We all know about the Day of the Dead in Mexico, but there is another aspect to this. Certain dead people have more influence than other. Those dead people are on their way to becoming minor deities.

Witness, for example, this interesting grave in Xela. It is that of a girl who supposedly killed herself in 1927 when the man she loved came back from Spain with a wife. A famous poem was written about her by Jose Marti:

Many people are convinced that this dead girl can infuse love into their wayward husbands and beloved classmates, so they'll write little recados, or wishes, all over the tomb, which has to be repainted quite frequently in order to make blank spaces. 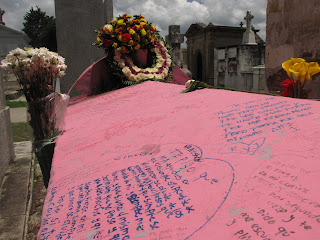 Some of these dead people become deities, like the little skeleton effigy of El Rey San Pascual, which was recently booted out of a Catholic church because he was distracting the worshipers. The worshipers just built a whole new chapel around him, and he even gets recados from Guatemalans who emigrated to the United States. Many, many towns have such minor deities. 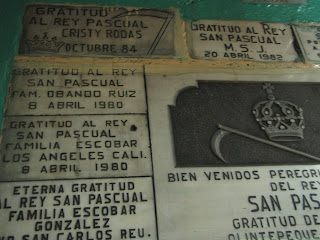 Here is one of the more controvertial among those minor deities. Meet San Simon, a strange object of veneration. This person is the effigy of a white man, and supposedly stands in for a complex Mayan deity, or the devil, or a Christian saint, or nothing at all, depending on who ou ask. The fact is, very poor people waste their money and their hopes giving his puppets whiskey, tequila, cigarettes, candles, incense, money, and some say that women sleep with the life-size puppet of him in a couple of towns. 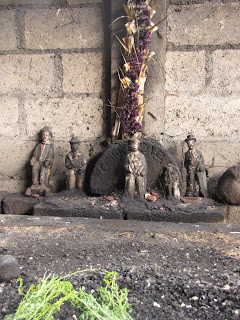 He is the perfect excuse for an annual day of debauchery. The whole town (pregnant and old women included) gets drunk "in his honor," and he even has a sponsor beer. 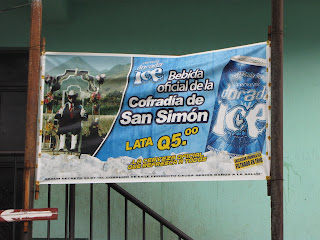 Did I mention the dead person who made it furthest? Guatemala is very Catholic, and various brands of evangelical movements have been very active lately. I once dared suggest that had Muslims invaded, raped, and destroyed Meso-American civilizations, Central America would be Muslim, and that had Buddhists invaded and enslaved the Mayan heartland, Guatemala would be Buddhist. The very liberal people to whom I suggested this were incensed. Of course, there is only one true religion, everyone else is wrong, God speaks to some people and Satan to others, and I am going to hell. Quickly. 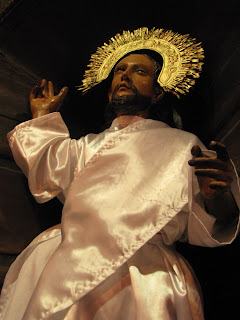 Thankfully, the traditional religions are being revived in more tolerant, objective, and open-minded ways in many, many places. It's not always New Age ideas, either. Some of it is real, deep, and directly connected to solid traditions and scholarhip. There are more Mayan priests all the time, and they might be getting better all the time, too. 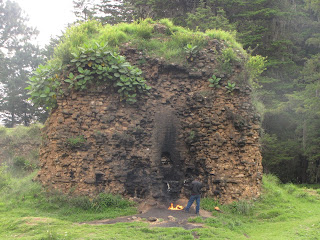 There are many people who have been climbing mountains to light candles in sacred places where there is no mandatory tithing, no tequila store, and more than one possible way to understand the world. 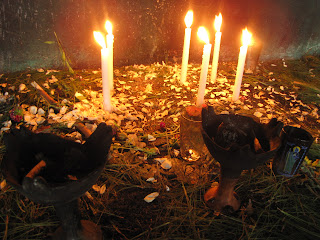 But there are also some clear disconnects with the traditions, such as with this statue of a monkey in Takalik Abaj. Many locals believe that it helps fertilitybecause it is "pregnant." In fact, modern scholarship is pretty unequivocal: that's just the style of the bygone civilization that carved it. 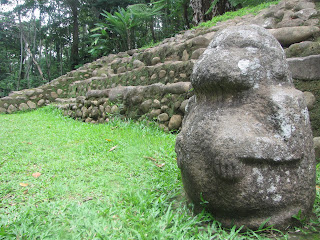 Here's a celebration of the Mayan New Year in Laguna Chicabal - a volcanic crater lake that supposedly harbors the gods of rain. 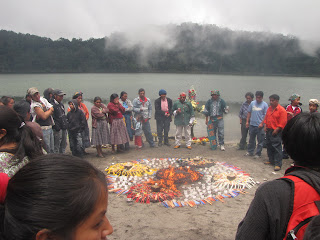 Many people saw nothing strange about having a Pentacostal ceremony on the lake shore. 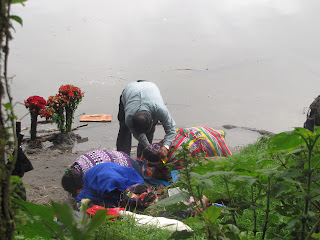 Most of the ceremonies were private and traditional, but the church still has its hand in this. The Mayan oral tradition is almost entirely lost, and most of what we know of it comes from a corrupted version written down by a priest. Many traditions were artificially paralleled with Catholic traditions. This particular one was changed to where the "Mayan new year" coincides with ascension, so that it no longer follows the Mayan calendar, or coincide with the beginning of the rainy season. 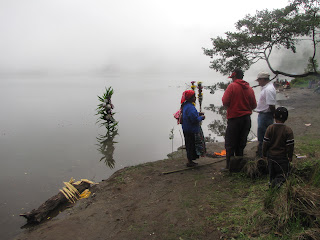 It's nice to see that people can now practice their traditions without being persecuted for it. 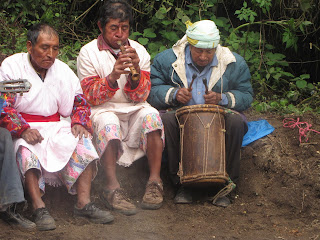 And by the way, if this is interesting to you, you might want to look into the cult of the Santa Muerte in Mexico. What are its links to organized crime? Is it a native tradition? Is it compatible with Christianity? Is it pseudo-witchcraft? What right does the Mexican government have to act against it? Is it going to become a significant trend in the US? 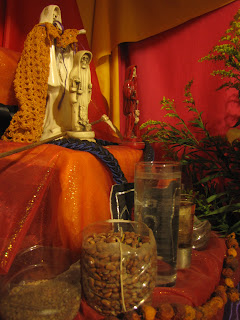 Clearly there are many questions, and no easy answers, even if one sticks to the basic aspects of any religious practice.
Posted by Paul Norwood at 3:07 PM No comments:

Time flies! I've already gone three whole months without writing anything at all in this weblog. I just sprained my ankle and school doesn't start until tomorrow, so this might be a good time to try and get things somewhat up-to-date.

Well, after studying at the Escuela de la Montaña, I went to the Proyecto Lingüístico Quetzalteco de Español, a rather famous and large school, where I studied such things as the works of Asturias, and some Latin American history. I was not able to do many tourist activities, but I did learn a lot about Latin American culture.

I also learned to navigate the Guatemalan trasportation system, for example doing an epic, two-day loop through the mountains, then across Lago de Atitlan, then through the Pacific Coast lowlands using a whole range of excentric modes of transportation (of course, my camera died during that trip). 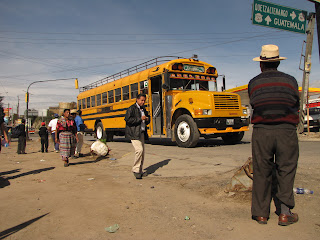 Most importantly, I learned a lot about the Guatemalans. The poverty level in Guatemala is incomprehensible. Many, many people are malnourished - especially children. Beans are surprisingly uncommon in poor houselholds, and aren't normally grown in the plantations (farmers are almost completely dependent on low-quality, subsidized fertilizers). As a result, proteins are in short supply, and many families rely on their kids killing birds and catching crabs to put small amounts of protein on the table. 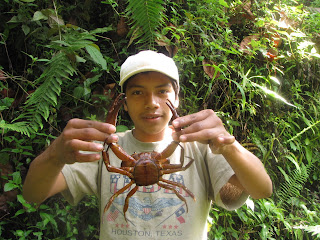 The main cultivation there is coffee - which does the vast majority of the population very little good and enriches a small elite of mostly white, quasi-aristocratic families. 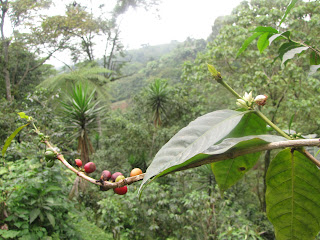 There are also other crops, obviously, mostly classic tropical crops such as mangoes, bannanas, lots of cardamom, skinny cows, slash-and-burn in the northern jungles, etc. This is a small view of a rubber plantation. 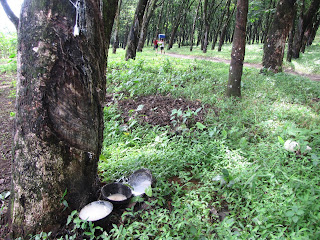 Thankfully, not everything is a monoculture. This tree fern grows in a coffee plantation. Although the normal threat to tree ferns is exploitation for making garden ornaments, in Guatemala it seems to be mostly harvested for the supposed medicinal qualities of the heart of the stem. 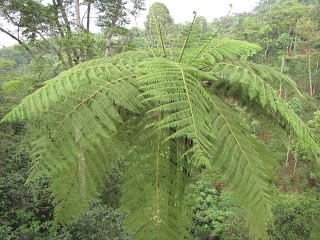 Birds are fairly rare in many parts, often because they are pretty intensively hunted. This parrot is just one of many, many unusual pets I came across in and around people's homes. 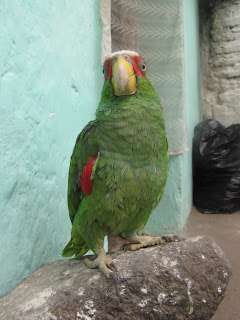