For many university students in North America, Spring Break is a time to go to the beach somewhere warm, get drunk, and act in irresponsible ways (see photo to left of text). Even though airfares were ridiculously expensive, several UAS students I know undertook a pilgrimage to warmer climes (Las Vegas, Cancún, etc.) and came back just a shade darker and (I presume) significantly poorer. One of them actually told me this:

“Man, the booze was so cheap!”

I have been missing Sitka, so I spent my Spring Break there. It was really nice to get out of Juneau, and I really loved riding the ferry out there and back. We now have a very fast ferry, the M/V Fairweather, which makes the trip between Sitka and Juneau about twice a week in just 4.5 hours instead of 12, which is almost better than flying these days. And I got to see all kinds of wildlife on the way, such as humpback whales, a sea otter, a small pod of killer whales, pigeon guillemots, 2 brown scoters, lots of surf scoters, three black scoters, a few oldsquaws, five black oystercatchers, many common birds, and cool landscapes. 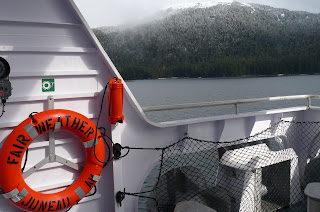 My main activity there was to do volunteer work at the Sheldon Jackson hatchery, a place that raises salmon and has been going through really tough times financially. The SJ hatchery is a non-profit organization which was created to train people in Alaska for jobs in the hatchery business. There are many hatcheries in this area, including one in Silver Bay at the end of the road in Sitka. Their purpose is to raise salmon until they get to a size where mortality is fairly low, so as to ensure greater returns to the streams. In the photo below, I am putting a 1.1 millimeter steel wire tag into the nose of a king salmon which is about the size of a finger. This wire tag is minuscule, and yet it has a long code printed on it which a biologist would read after he has extracted it from the adult fish. Before tagging the salmon, we cut off

its adipose fin (the one on the fish’s back behind the dorsal fin) so that tagged fish are easy to spot amidst the catch. There were several of us volunteers present, and we tagged thousands of fishes while I was there. 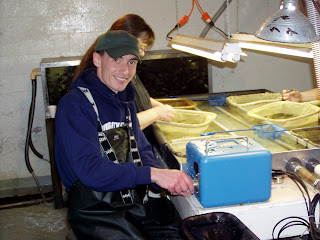 I wanted to find a piece of property that I could buy, but housing prices are still really high in Sitka, so I decided to wait a little longer. Every piece of property under $200,000 has a problem. Either it is raw land in locations that are difficult to access, or a mobile home (and then I’d have to rent a place to put it on), or something that cannot be bought with a traditional loan because it doesn’t meet building codes (such as a World War II bunker for $150,000). Hopefully prices come down a little, or something will come up that is more reasonably priced.

I had been planning to do a lot of hiking, but in the end I spent very little time on the trails. This is too bad, since the weather was pleasant overall, and even when it snowed and rained it wasn’t too bad, as in this hike in the muskeg by the Starrigavan Estuary: 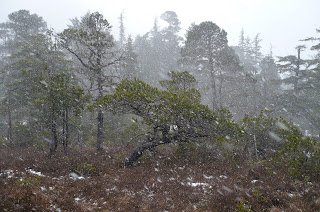 Posted by Paul Norwood at 4:20 PM No comments:

Temperatures and mood are up throughout the Juneau area

After a brief and depressing snowfall, Juneau has been blessed with warm weather, rain, and even some sun! Spring is on its way, and soon I will be learning about botany! Last Saturday I went for a hike with Mac up Perseverance trail behind downtown Juneau. In spite of deep snow, we saw a red-breasted sapsucker Sphyrapicus ruber (a migratory species here), alders in bloom, porcupine tracks everywhere, and American dippers Cinclus mexicanus singing in the creek: 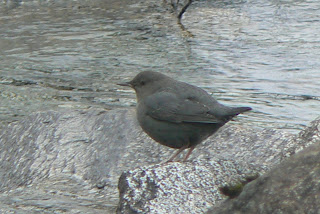 I got to do an afternoon of shrimp identification this past week with an invertebrate zoology class; I learned a lot and even identified three or four shrimp myself, but I forgot to take pictures again. I saw two hoary redpolls up close this past week, and didn't have my camera with me of course! However, I took some pictures of ferns on two of my walks.

This one is a small Asplenium viride:

And this is the very common “licorice fern,” Polypodium vulgare or P. glycirrhyza:

Finally, this is a neat Cryptogramma acrostichoides (or C. Crispa var. acrostichoides) I found on our latest hike. The brown leaves in the back are fertile fronds:

And I thought that with almost all news in Alaska politics being bad news (FBI raiding the offices of our elected representatives, etc.), I’d point out that our governor is pregnant! She’s actually quite popular in Alaska (even here in Juneau where she was feared as a proponent of the capital move), and there have been rumors going around that she’ll run with McCain. All right, let’s not get carried away here; she’s got very little experience even for a state politician, and McCain is in his 70’s so his VP should be a credible statesperson.

Posted by Paul Norwood at 8:35 AM No comments: